Devotionals typically last 5–7 minutes and can be viewed at 4:00 p.m. (Mountain Time) on the BYU-Pathway Facebook page and later on the BYU-Pathway speeches page. PathwayConnect students responsible for leading the lesson in their weekly gathering that week will facilitate a discussion around topics shared in the devotional. All participants are invited to watch, share, and discuss these inspiring messages. 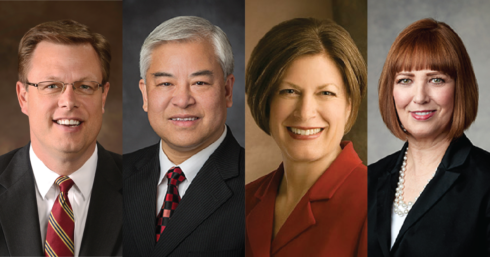 Clark G. Gilbert is the president of BYU-Pathway Worldwide. President Gilbert previously served as the president of BYU-Idaho as well as the president and CEO of Deseret News and Deseret Digital Media. He served his mission in Kobe, Japan, and later met his wife, Christine, at BYU. He went on to earn his master’s degree in East Asian studies from Stanford University and graduated with a doctorate in business administration from Harvard Business School. President Gilbert and Christine are the parents of eight children.

Elder Chi Hong (Sam) Wong was sustained as a General Authority Seventy in April 2014. Elder Wong was born in Hong Kong SAR, China, and joined The Church of Jesus Christ of Latter-day Saints at age 20. He earned an associate degree in computer science and a bachelor’s degree in accounting from BYU-Hawaii, then received his MBA from the Open University of Hong Kong. Elder Wong has served in many capacities within the Church, including Sunday School president, Young Men president, bishop, and stake president. He and his wife, Carol, are the parents of four children.

Sister Julie B. Beck served as Relief Society General President from 2007–2012, as well as first counselor in the Young Women General Presidency from 2002–2007. Sister Beck lived in Brazil for five years and learned to speak Portuguese while her parents presided over the Brazilian mission. She also learned Spanish as a General Officer of the Church. She earned an associate degree from Dixie State College and graduated from BYU with a bachelor’s degree in family science. She and her husband, Ramon, are the parents of three children.

Sister Cristina B. Franco was called as the second counselor in the Primary General Presidency in April 2017. Sister Franco was born and raised in Buenos Aires, Argentina, and her family joined the Church when she was three years old. She worked in her family’s watchmaking business for 28 years and has a passion for art. She has served in numerous callings within the Primary, Sunday School, Young Women, and Relief Society organizations. Sister Franco married her best friend since Primary, Rodolfo, and they are the parents of three sons.