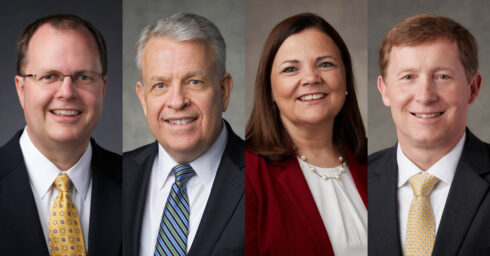 BYU-Pathway President Brian K. Ashton
Brian K. Ashton is the president of BYU-Pathway. President Ashton was the organization’s first vice president of field operations and has also served as Second Counselor in the Church’s Sunday School General Presidency. He received a bachelor’s degree from Brigham Young University and an MBA from Harvard Business School and previously led an EdTech start-up. He and his wife, Melinda, are the parents of seven children.

Elder Brent Nielson, General Authority Seventy
Brent Nielson was sustained as a member of the Presidency of the Seventy in August 2020, and is from Burley, Idaho, USA. He received a bachelor’s degree from Brigham Young University and a juris doctor degree in law from the University of Utah. He served a full-time mission in Finland and was the executive director of the Missionary Department before his current calling. He and his wife, Marcia Ann Bradford, are the parents of six children.

Sister Renée Costa
Renée Costa served a full-time mission and later married Elder Joaquin Esteban Costa, General Authority Seventy, after he joined the Church. She earned a bachelor’s degree in English-Spanish translation and later earned a certificate in marriage and family studies through BYU-Pathway. She and Elder Costa have four children and have lived all over the world, including in Czech Republic, Brazil, Oman, Chicago, Provo, Peru, and now Argentina.

Bishop L. Todd Budge, General Authority Seventy
L. Todd Budge was sustained as Second Counselor in the Presiding Bishopric in October 2020, and was born in Pittsburg, California, USA. He received a bachelor’s degree in economics from Brigham Young University and has been president, CEO, and chairman of several companies. He served a full-time mission in Fukuoka, Japan, and later returned as president of the Japan Tokyo Mission. He and his wife, Lori Capener, are the parents of six children.