Devotionals typically last 7–10 minutes and can be viewed at 4:00 p.m. (MST/UTC-7) on the BYU-Pathway Facebook page and later on the BYU-Pathway speeches page. Students responsible for leading the lesson in their gathering that week will facilitate a discussion around topics shared in the devotional. All participants are invited to watch, share, and discuss these inspiring messages. 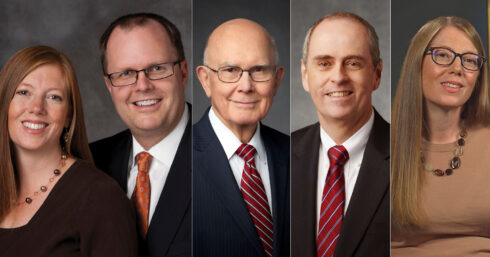 Melinda Ashton graduated from BYU and later attended medical school in Chicago, Illinois. She served in the Spain Malaga Mission and later presided with Brian over the Texas Houston South Mission from 2012 to 2015. Melinda and Brian are the parents of seven children.

Dallin H. Oaks is the First Counselor in the First Presidency. He graduated from BYU and University of Chicago Law School. He practiced and taught law in Chicago before becoming president of BYU and later a justice of the Utah Supreme Court. President Oaks is the recipient of the Canterbury Medal for “courage in the defense of religious liberty.” He had six children with his late wife, June, and later married his wife, Kristen, in 2000.

Milton Camargo is the First Counselor in the Sunday School General Presidency and currently works as the vice president of curriculum at BYU‑Pathway Worldwide. He previously served as an Area Seventy and a mission president. Brother Camargo studied civil engineering at Instituto Militar De Engenharia and earned an MBA from BYU. He and his wife, Patricia, are the parents of three children.