Clark G. Gilbert spoke about creating temples of learning during his inaugural address as the first president of BYU-Pathway Worldwide, held November 16 in Salt Lake City.

“At BYU-Pathway Worldwide, we are constructing temples of learning — both in the lives of our students and in the organization that serves those students.… Constructing a temple of the Lord requires that we keep Christ at the center and build according to His plans,” said Gilbert. 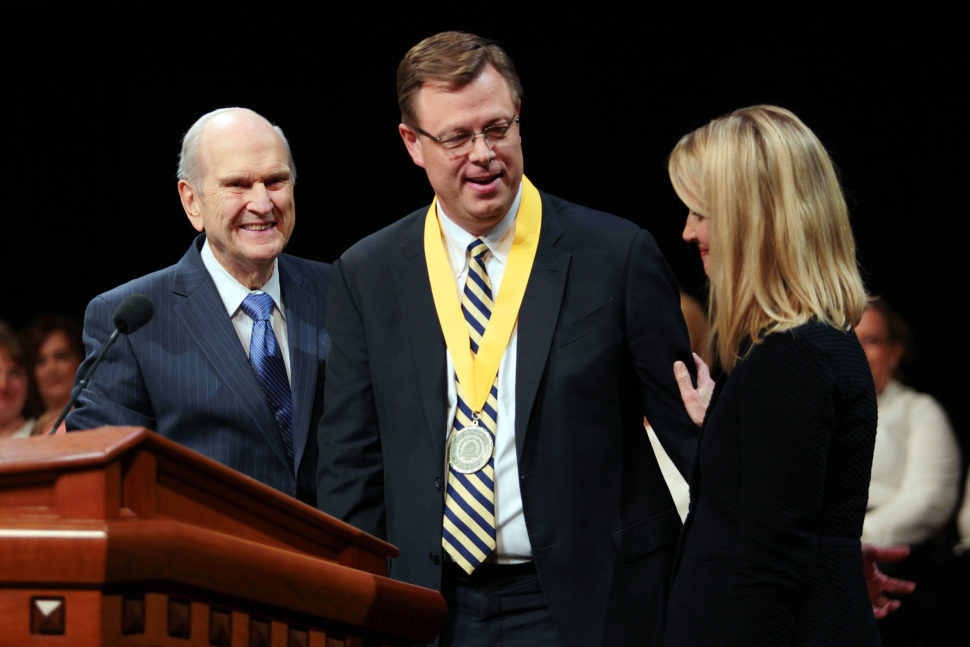 Elder David A. Bednar of the Quorum of the Twelve Apostles and Elder Kim B. Clark, General Authority Seventy and Commissioner of the Church Educational System (CES), also participated in the ceremony.

President Gilbert continued his theme of “temples of learning” by talking about the underlying purposes of obtaining education.

“[O]ur focus on education isn’t rooted in a cultural norm, the hope for financial security, or even a desire for intellectual edification. To disciples of Christ, education is part of the path to conversion and the resultant call to reach for our divine potential.”

During his inaugural response, Gilbert also outlined that the new organization’s core emphasis will always be the PathwayConnect program because it provides hope, confidence, and greater access to education through its affordability, curriculum designed to help students build confidence, and the support students enjoy through online courses and weekly local gatherings.

President Gilbert explained the history of BYU-Pathway Worldwide and the organization’s goals for the future, including continuing partnerships with CES, Brigham Young University-Idaho, LDS Business College, Self-reliance Services, and the Church’s missionary department.

President Gilbert commented that BYU-Pathway will continue to focus on its three central purposes to get the gospel down into students’ hearts, help students become capable learners, and prepare students to lead and support families.

Elder Clark also spoke at the inauguration, praising the employees of BYU-Pathway for their dedication to the Lord.

“The people of what is now BYU-Pathway Worldwide know the voice of the Good Shepherd. He has called them and they have followed Him. They are consecrated, and faithful, and the Lord Jesus Christ has blessed them and will continue to bless them,” said Elder Clark.

President Nelson highlighted the unique nature of BYU-Pathway and the impact the organization has had on students’ lives by sharing the stories of three PathwayConnect students around the world.

“The creation of BYU-Pathway Worldwide brings an innovative approach to education — one unique to the Church Educational System and to the world. Because many students cannot go to CES campuses, PathwayConnect has found a way to take the CES experience to the students. I hope that each of you special students can realize the inspiration of this program and the blessing it has been — and will continue to be — in your lives. PathwayConnect has already been a life-changing force in the lives of many students,” said President Nelson.

President Nelson also encouraged members of the Church around the world to seek learning in their lives.

“I encourage each person, regardless of age, to continue to learn.  Pursue whatever path will be most valuable to you and your family.  You will be blessed as you do this.  You will grow academically, professionally, and spiritually as you seek to enhance your education,” said President Nelson.

The inaugural ceremony also included a video message to President Gilbert from BYU-Pathway Worldwide students as well as musical performances by a student choir from throughout the Salt Lake area.

Prior to his new assignment, President Gilbert served as the 16th president of Brigham Young University-Idaho from April 2015–April 2017. As president of BYU-Idaho, he focused on increased access to education and student mentoring. He also pioneered the growth of the university’s online programs — more than 20 percent of BYU-Idaho’s campus credits are now taught online.

President Gilbert started his time at BYU-Idaho in 2006 and served in a variety of positions, including associate academic vice president. This particular role had President Gilbert oversee online learning, and he played a vital part in the creation of the Pathway program (now called PathwayConnect), which is a core offering of BYU-Pathway Worldwide.

Between his stints at BYU-Idaho, President Gilbert served as president and CEO of Deseret News Publishing Company and Deseret Digital Media from 2009–2015. From his work with expanding the national prominence of Deseret News, he was recognized as the 2011 Innovator of the Year by multiple media associations.

Early in his career, President Gilbert taught as a professor of entrepreneurial management at the Harvard Business School where he taught and studied in the field of organizational innovation. He recently co-authored the book Dual Transformation in Harvard Business School Press, which helps senior leaders look at how to organize for change.

President Gilbert graduated from Brigham Young University with a bachelor’s degree in international relations. He earned a master’s degree in East Asian studies from Stanford University and a doctorate degree in business administration from the Harvard Business School.

President Gilbert has served in multiple ecclesiastical roles, including counselor in a stake presidency, bishop, Young Men’s president, and Scoutmaster. He currently serves as a gospel doctrine teacher.

President Gilbert was born in California and raised in Arizona. After serving as a missionary for The Church of Jesus Christ of Latter-day Saints in Japan, he married his wife, Christine. They are the parents of eight children.