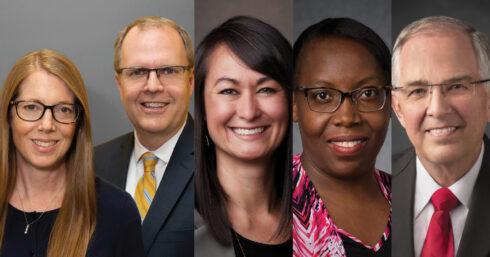 Melinda Ashton graduated from BYU and later attended medical school in Chicago, Illinois. She served in the Spain Malaga Mission and later presided with Brian over the Texas Houston South Mission from 2012 to 2015. Melinda and Brian are the parents of seven children.

Sister Kristin M. Yee was sustained as Second Counselor in the Relief Society General Presidency at the April 2022 general conference. Sister Yee completed bachelor’s and master’s degrees at Brigham Young University. She now works as the manager of the Church’s animation team and was previously employed by Disney Interactive Studios for 13 years. Her Church assignments have included the Primary general advisory council (since 2021), Relief Society president at stake and ward levels, ward Young Women president and Sunday School teacher. She was born in Sacramento, California.

Neil L. Andersen graduated from Brigham Young University, where he was a Hinckley Scholar, and earned a master of business administration from Harvard University. He settled in Tampa, Florida, where his business interests included advertising, real estate development and health care. Elder Andersen served as a mission president in the France Bordeaux Mission and as president of the Tampa Florida Stake. Prior to his call as an Apostle, he led the work of the Church in southern Brazil, western Europe, Mexico and Central America. In addition, he served as the executive director of the Church Audiovisual Department. Elder Andersen and his wife, Kathy, are the parents of four children.

Sister Shamiso Mberengwa Makasi was born and raised in Mkoba township in Gweru, Zimbabwe. She now works as a university lecturer teaching students financial accounting. Sister Makasi has a bachelor’s degree in accounting, a master’s degree in finance and investments, and is pursuing a Ph.D. She presided with her husband, Tasara, over the Zimbabwe Harare Mission from 2018-2021. Sister Makasi currently serves as a counselor in the Relief Society Presidency and she and her husband have four children.